Why we love them: King mackerel, almost always called kingfish around the Treasure Coast, are a great offshore fish to pursue, but it’s amazing how many people look down upon them, unfairly, I believe, because they are not at the top of the desirable list on the table. For sport, they can be great fun. They can run huge, as large as 50 and 60 pounds, locally, although the catch of a 15 to 30-pound kingfish is a memorable and exciting test on light stand-up tackle; they are known for reel-blistering first runs when they strike a bait, which is one attribute that earned them the nickname “smokers;” they can be caught with a variety of live and dead baits; and they are a fun fish to target during a tournament setting for these same reasons. Typically, they are caught in waters from as shallow as 15 feet during the calm summers, to as deep as 90 feet, and they prefer to hang around two objects of attraction – reefs or schools of baitfish.

After the catch: Kingfish can be easily filleted and are just fine when chunked into nuggets for the fryer, or cooked in a mixture of lemon juice and butter on the barbecue grill. Most commonly, kingfish have the reputation for being a variety of fish that is often smoked on the smoker, and then eaten like that, or made into a smoked fish dip with some mayo, pimentos, relish, and paprika. If concerned about mercury poisoning, limit consumption to smaller kingfish and eat small amounts of it per week or month. 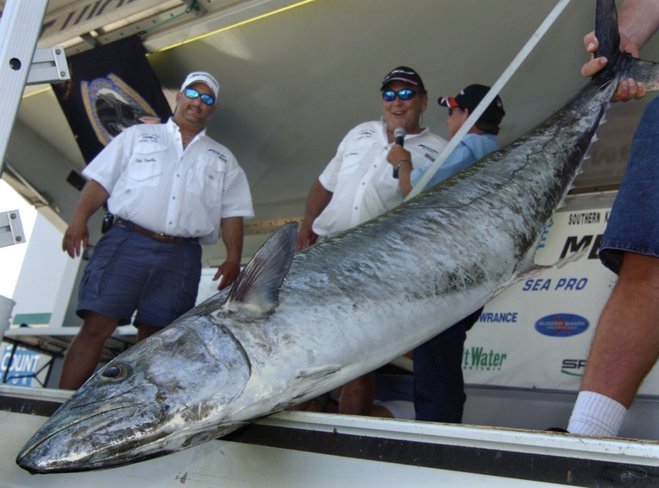 Indian River County inshore: Capt. Brian Williamson, of Vero Tackle and Marina, said the mild weather this week has made fishing the Indian River Lagoon and area beaches a little easier. Monday, Williamson’s trip started off slow, but once the tide turned, it improved. His anglers fished in 2 to 4 feet of water on the incoming tide and picked up five snook to 11 pounds, two redfish to 12 pounds and some good-sized trout to four and five pounds. The water is cleaning up a little and the bait fish are starting to show up in better numbers.

St. Lucie County inshore: Lane Burton, of DeBrooks Fishing Corner in Fort Pierce, said his customers were reporting pretty steady action at the Fort Pierce Jetty on Spanish mackerel and bluefish in the upper portion of the water column, on spoons and chrome plugs, or chartreuse jigs. On the bottom, from the jetty, one angler caught four legal flounder on four consecutive casts. Wade fishing has been productive for trout and redfish at Bear Point, Little Mud Creek and on the western shoreline of the lagoon.

Martin County inshore: Capt. Justin Rieger, of Just-N-Time charters out of Snook Nook Bait and Tackle in Jensen Beach, said the fishing in the Indian River Lagoon, despite poor water quality, has been surprisingly steady. Anglers jigging the bridges at Jensen Beach Causeway are catching pompano and sheepshead, and they are catching them inside the St. Lucie Inlet during the end of the incoming tide. Rieger said fishing for redfish on the west side of the lagoon has been fair, but not great in the last week. Trout fishing is about the same.

Indian River County offshore: Capt. Brian Williamson, of Vero Tackle and Marina, said the dolphin bite has been good in 120 to 150 feet of water. Finding a current edge is a key to success. For bottom fishermen, snapper have been consistent, but the fishing is not great for them, yet. There are a few cobia around that are being caught by anglers fishing the reefs for snapper. The kingfish have yet to show in good numbers and sharks are still around, so reel fast.

St. Lucie County offshore: Capt. Richard Hunt, of Little Adam fishing charters in Fort Pierce, steered his clients Wednesday to a full day offshore charter that produced four kingfish, 11 yellowtail snapper, eight lane snapper and nine of what Hunt called the biggest triggerfish he has ever seen. The triggers were five pounds at the smallest and up to nearly 10 pounds, which is a whopper, he said. Hunt added that he picked up live bait from Dave’s Live Bait in the inlet who said it was the first good day of bait fishing he has had this season.

Martin County offshore: Capt. Justin Rieger, of Just-N-Time charters out of Snook Nook Bait and Tackle in Jensen Beach, said he was able to get his first decent cobia of the season on Monday, a bulky, barrel-chested 50-pounder, along with a few other fish, too. Rieger said the bottom fishing has been picking up for the party boat customers with good fishing for lane snapper, mutton snapper, triggerfish, porgies and more. Sharks are around, so reel fast.

Bass: Capt. Mike Shellen, of Okeechobeebassfishing.com, said the level of Lake Okeechobee has finally dipped below 16 feet and the bass are definitely chewing. Tuesday, his charter caught, among its total catch, six bass between 5.75 and 7.25 pounds. The anglers caught 30 bass total on the day fishing a spot Shellen staked out that was about as large as a pickup truck. Wild shiners were the key as the bass were happy and feeding aggressively.

Speckled perch: Shellen said anglers targeting speckled perch are struggling to catch their 25 fish limits. Small jigs are still the best method to catch specks in the grassy areas, with live minnows being the way to target them in the deeper water. The next full moon phase, coming on March 23, should kick off the season’s first spawning activity for other popular panfish such as bluegill and shellcrackers.

Blue Cypress: Jeanne Middleton, at Middleton’s Fish Camp, said bass fishing has been steady and good out on the small natural lake. Last week, a bass club fished there with 15 boats and caught and released 47 bass weighing a combined 176 pounds. The biggest fish weighed 6.85 pounds and it took more than 22 pounds to win it. There were four bass caught that were heavier than 6 pounds, too.

Thursday: East winds 5 to 10 knots becoming southeast 10 to 15 knots in the afternoon. Seas 3 to 4 feet with a dominant period 6 seconds. A moderate chop on the intracoastal waters.

Thursday night: South winds 10 to 15 knots becoming southwest after midnight. Seas 2 to 3 feet with a dominant period 9 seconds. A light chop on the intracoastal waters. Slight chance of showers after midnight.

Friday: Northwest winds 10 to 15 knots. Seas 2 to 3 feet. A moderate chop on the intracoastal waters.

Through May 31: Snook season is open on Atlantic coast of Florida, Lake Okeechobee and the Kissimmee River. Minimum size: 28 inches. Maximum size: 32 inches. Bag limit: One per angler per day. Other: Must have valid Florida saltwater fishing license and snook stamp. For complete fishing regulations go to www.MyFWC.com.