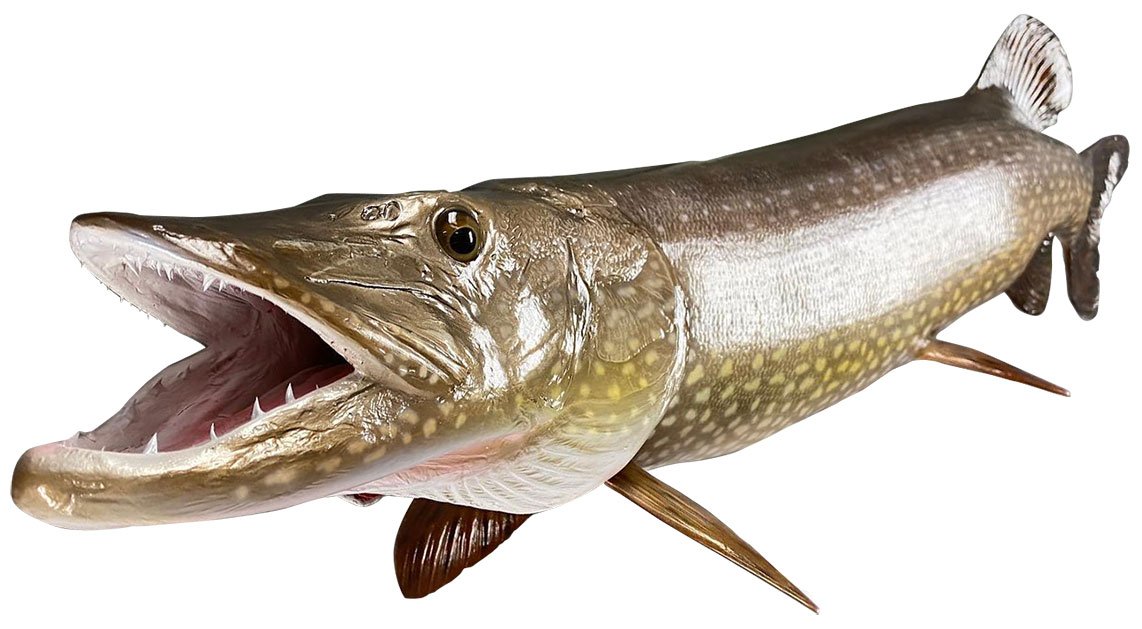 Northern pike are highly prized as a gamefish and often end up as a wall mount. They are a favorite target of northern, cold water anglers as they are known to be extremely aggressive and will hit nearly anything that moves. This means that oftentimes the best lure for catching them is simply the one that’s easiest to remove from their mouth.

They are a relatively large fish that grow to lengths of nearly five feet and weigh more than 50 pounds. Most of these fish don’t grow quite that large, but they are still a good size fish that looks fantastic on the wall. They also usually make for a great story.

We take great pride in every fish created at our facility in Stuart, Florida and our northern pike mounts are no exception. Each and every mount created at New Wave Taxidermy is painstakingly hand crafted and custom painted to match our customers photos and specifications.

At New Wave Taxidermy, our goal is to create a fish that will proudly hang on your wall for a lifetime.

We love what we do at New Wave Taxidermy and we feel that it shows in our work. Please take a moment to browse the gallery below, then complete the form for your free quote on your trophy northern pike.

Northern pike (Esox lucius), known simply as pike in many parts of the world, are fun to catch and highly prized as a gamefish. They live in lakes, reservoirs, rivers, and streams throughout the northern hemisphere. These aren’t small fish either. The current world record was caught in Germany, it weighed 55 pounds and was 59 inches long.

They are known to be extremely aggressive ‘ambush predators’ and will often strike when they aren’t even hungry. Northern pike can be found in weed and grass beds or around underwater structures like trees and boulders. Lying in wait for the right moment, they use their sharp teeth and extreme speed to strike and kill their prey instantly.

Fill out the form below and if possible include a picture of your fish. If you have any specific details or any questions at all please contact us during our regular business hours listed below.